3.5million confirmed coronavirus cases have now been recorded around the world

The coronavirus has now infected more than 3.5million people worldwide in the latest grim milestone for the pandemic.

At least 3,506,729 people have been sickened by the virus since it emerged in China late last year, according to Johns Hopkins University figures.

Governments around the world say that the true figures are likely to be far higher,  because many probable virus cases are never confirmed by tests.

Donald Trump has predicted that the US will have a vaccine by the end of the year which would turn the tide against the virus, but experts say it could take far longer. 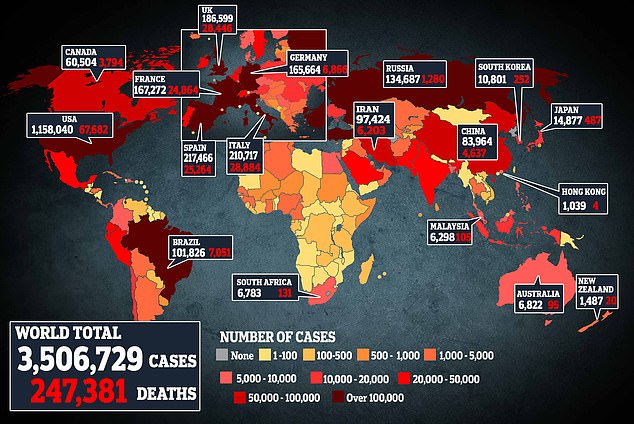 This map shows the latest picture around the world, with countries in darker red suffering more coronavirus cases 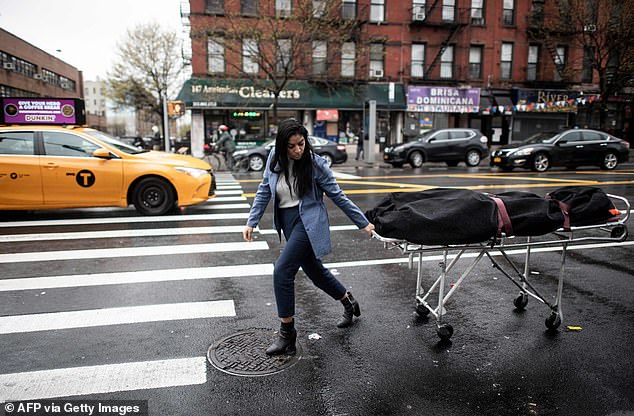 UNITED STATES: A funeral manager crosses a road as she drags a body to a funeral home in New York City, the centre of the world’s worst virus outbreak 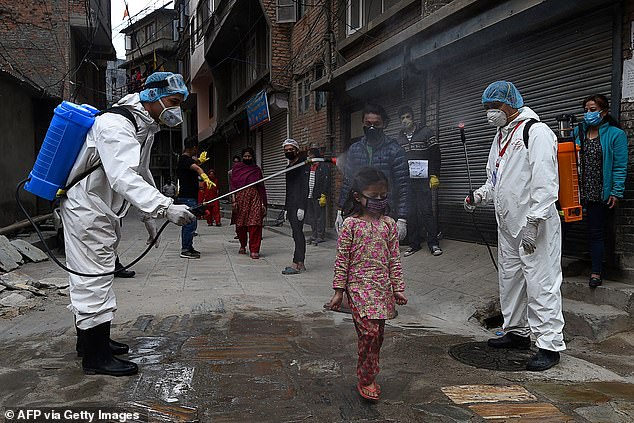 NEPAL: Health workers wearing protective suits spray disinfectant on a young girl wearing a a mask on a road in Kathmandu yesterday

Half the planet has been living under drastic lockdowns to stop the spread of the virus which would have been unthinkable in democratic countries until only a few weeks ago.

The lockdowns have caused a global economic standstill, leaving tens of millions of people out of work and derailing businesses from airlines to oil producers.

Politicians are now grappling with how to get the wheels turning again without sparking a second wave of infections.

Italy, which has one of the world’s worst outbreaks with 210,717 cases and 28,884 deaths, started to lift the lockdown after nearly two months today but many businesses remain closed.

Italy’s economy – the eurozone’s third-largest – is expected to shrink more than in any year since the global depression of the 1930s.

Germany and Spain are also taking steps to loosen the restrictions, while Britain has yet to make any major concessions.

In the US, weeks of lockdown have left 30million Americans out of work – endangering Trump’s re-election bid.

Trump has increasingly taken to blaming China for the outbreak, and says there is proof it started in a Chinese laboratory.

China denies the claims, and the US Director of National Intelligence has said analysts are still examining the exact origin.

Most scientists say the disease arose naturally in the animal kingdom. 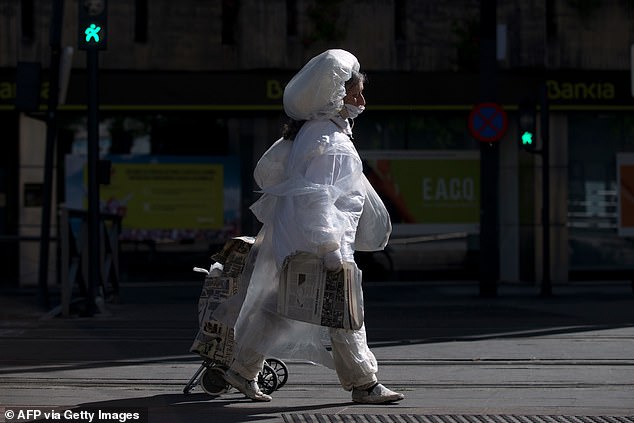 SPAIN: A woman covered in plastic film walks along a street in Granada on Saturday, carrying a trolley, after Spain slightly relaxed its lockdown restrictions 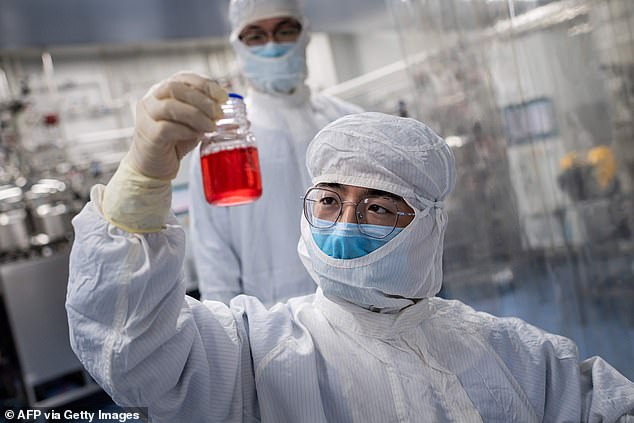 CHINA: An engineer looks at a sample of liquid as scientists work on a coronavirus vaccine in Beijing. Donald Trump has predicted that a vaccine could be available by Christmas

But Trump’s chief diplomat on Sunday ran with his boss’s position, citing ‘enormous’ evidence that the virus originated in a Wuhan lab.

‘I think the whole world can see now, remember, China has a history of infecting the world and running substandard laboratories,’ Secretary of State Mike Pompeo said.

The renewed anti-Chinese rumblings from Washington set financial markets on edge on Monday, as traders fretted about tensions between the world’s two largest economies.

Major market Hong Kong shed four per cent, while other Asian bourses lost two percent, and Europe started the day in the red.

Trump acknowledged that the US death toll would continue to rise, but predicted that a vaccine could come as soon as late 2020.

But, he acknowledged: ‘The doctors would say ‘well, you shouldn’t say that.’ I’ll say what I think.’

Jens Spahn described the development of effective vaccines as ‘one of the most challenging and difficult tasks in medicine’.

Virologists say that until there is an effective vaccine against the coronavirus, life will continue to look different, with social restrictions becoming the norm. 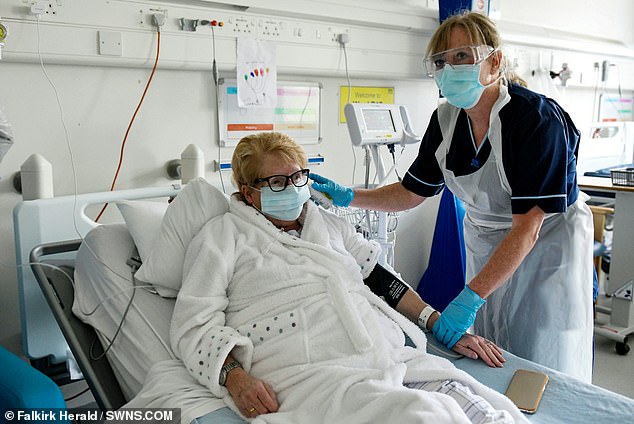 UNITED KINGDOM: A medical worker attends to a patient wearing a mask at Forth Valley Royal Hospital in Falkirk as doctors and nurses cope with the coronavirus crisis 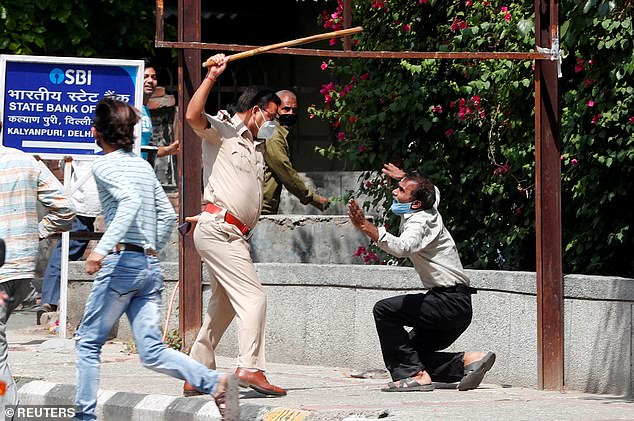 INDIA: A police officer raises a baton towards a man accused of breaking social distancing rules in New Delhi today

Many parts of Asia have, however, begun to inch towards a post-pandemic life, with schools in the Vietnamese capital Hanoi reopening on Monday after two weeks without new infections anywhere in the country.

Malaysians headed back to work, while Australia and New Zealand discussed creating a ‘trans-Tasman bubble’ that would allow travel between the two countries.

But regional heavyweight Japan extended its state of emergency to the end of the month.

Japan has reported a comparatively small-scale outbreak, with 15,000 infections and 510 deaths so far, but there have been persistent fears of a spike in cases.

Russia is rapidly becoming Europe’s blackspot, with officials in Moscow urging residents to stay home in an effort to tamp down the growing daily tally of new cases.

‘The threat is apparently on the rise,’ Moscow mayor Sergei Sobyanin told citizens.

In parts of the continent further along the infection curve, governments were starting to get to grips with the new normal.

Most are advocating continued social distancing and masks in public, as well as more testing to try to track infections.

Portugal allowed small shops, hair salons and car dealers to resume business from Monday, but ordered facemasks to be worn in stores and on public transport.

Nose and mouth coverings are also mandatory on public transport in neighbouring Spain.

Pandas mate for the first ti ...